Our patented Self-Heating Technology is a simple combination of food grade iron and magnesium powder, salt, and water. When the contents of the water pouch are poured over the heater pad, the Food Heater releases enough heat to warm-up a pre-cooked meal 100 degrees Fahrenheit in approximately 10 minutes.

HEATING ANY OF OUR SELF-HEATING MEALS IS EASY!

See how it works 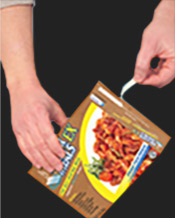 Open flap on right side of package with tab and slide out cardboard tray containing contents. 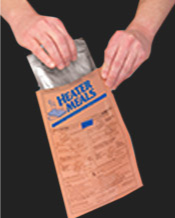 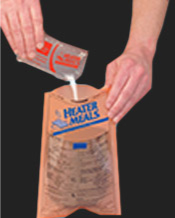 Open water pouch on the perforated end of pouch and pour into heater bag. Water starts food heater within 20 seconds. 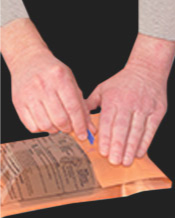 Fold heater bag to the requested dotted area and secure with the provided sticker. 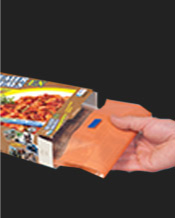 Place heater bag and meal back in box. Close box with tab. Place on heat-safe surface. Heater bag may be used without box for field use. 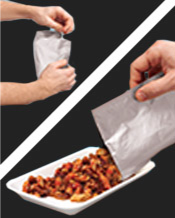 After 10 to 12 minutes, the meal is hot and ready to serve. Carefully pour heater meal into the provided tray and ENJOY!

FRH food heaters are used easily in situations where fire is prohibited or not
recommended; making the FRH ideal for soldiers in the field, campers, hunters,
boaters, or anyone interested in emergency preparedness supplies.
FRH food heaters weigh less than one ounce and are easy to store.

Self-Heating Technology was introduced for use as the Field Ration Heater (FRH) by the U.S. Armed Forces in 1990 to heat Meals, Ready-to-Eat (MREs) for soldiers in the field. We have heated nearly 2.5 Billion MREs since then.

You can find out more about the Flameless Ration Heater HERE.

Since 1990, Luxfer Magtech have made over 2.5 Billion Flameless Ration Heaters.

Contact the Heatermeals office to enquire about wholesale pricing